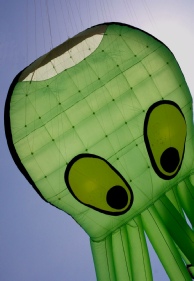 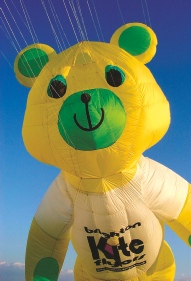 Brighton Kite Flyers often known affectionately as the “The BKF” was first formed by a small group of friends who flew kites together back in the 1970’s. Since then it has developed and grown into a flourishing club of kite flying enthusiasts from all around the world and from all aspects of the sport and hobby of kite flying.  Members fly not only their own kites but are able to fly clubs collection of large display inflatable kites.

The club is renowned for its friendly and enthusiastic approach to kite flying and its willingness to work with other kite flyers, public and community groups to promote the sport / hobby of kite making and flying. The club has official recognition of its comradeship by twice winning the “Team Spirit” award at Portsmouth international kite festival. A feet not repeated by any other organisation.

Club members fly all around the world at not only specialised kite festival but show events as well, from country shows to family parties and almost anything in between. We also have club fly-ins, kite making workshops and social events throughout the year. As well as its annual Kite Festival in Stanmer Park (this year on the 11th & 12th July 2020)

If you are interested in having a go come along and have a chat you can often recognise us by our distinct clothing often worn when we are out flying. Or if you would like some kites flown as an attraction please feel free to contact us and we will see what we can do to help.

FLYING FOR FUN, FLYING TOGETHER