FLYING FOR FUN, FLYING TOGETHER

It’s not often you can have a free day out for all the Family but the Brighton Kite Festival  which has been running for over 40 years now and is organised by members of Brighton Kite Flyers is one such event.

Each year the event has attracted more and more interest from not only kite flyers, but also the public alike, and we are now seeing children that came along in the early days coming along with their children and grandchildren.

The event this year again will take place in Stanmer Park, Brighton, East Sussex. On the 11th and 12th  July  2020, the opening times to the public are between 11.00am and 5.00pm with a night fly on the Saturday night for kite flyers.

There  will be having arena displays throughout both days from internationally recognized flyers and club members. There are also large areas of land where non-arena flying can take place.

A children’s kite workshop where a basic sled kite can be made free of charge between 1.00 and 3.00pm on both days with the children being asked to fly their kites in the arena at 3.30pm..

With the clubs aim of the festival, being to give all those that attend a good spectacle and fun as well, we will be having other non kiting attractions  for the public to be entertained by, and this year these include the  following, birds of pray, local fire brigade, fun fair including bouncy castles and much more.

There will be a selection of traders at the event including kites stalls, food outlets, ice cream van  along with some non-kite stalls selling clothing and such like.

On display, this year should be a selection of large inflatable kites including the Brighton Kite Flyers 60-foot whale, it collection of spirit kites and other wonderful creations

The festival will be signposted from the A23 and A27, which will direct you to the Stanmer Park for Parking (towards the back of the park)The nearest British Rail Station is Falmer. And by bus the BRIGHTON & HOVE bus route 25 from Brighton stops just outside the park.

Please note that all events are weather dependent and Brighton kite Flyers can note be held responsible for changes and cancellations. 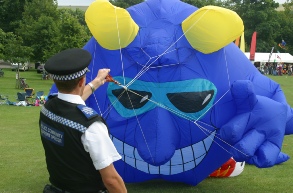 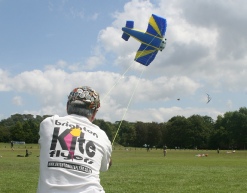 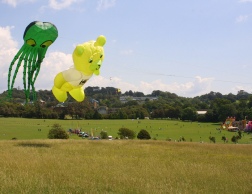